Nunavut Day 2022 is now history, but the memories I made this year will last a lifetime. My name is Paul Quassa, and I am the Senior Advisor at Baffinland, and former Nunavut premier, who helped negotiate the Nunavut Agreement that led to the creation of the territory. And I recently spent two days at the Mary River and Milne Port sites as the guest of honour for Nunavut day celebrations. 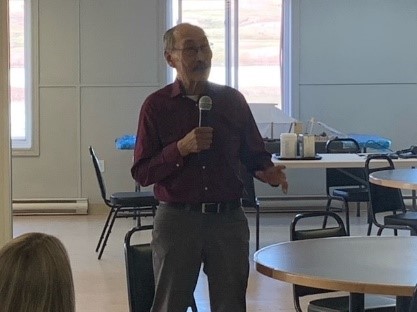 I want to say up front, I had the most wonderful time at site and I feel like I learned as much, if not more, than I taught. It was definitely an attentive crowd gathered for my presentation in the Dining Hall on the first day, when I spoke about who the Inuit are, and our history, from the time the first Europeans arrived in our homeland until today. I also described how the vision of becoming landlords of our own territory started in the 1970s, and what the vision is for the future. And more importantly, I spoke about how respect for the Inuit culture is what we want to preserve. 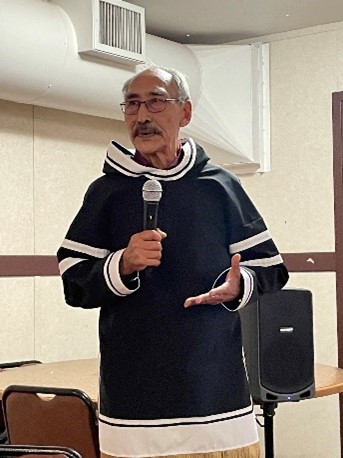 I was very flattered by the positive response I received to my comments about how important the Inuktitut language is, and how it is now constitutionally protected in Canada. I stressed that those coming to work in Nunavut should try to learn a few words, such as ‘ullaakut’ (good morning) or ‘nakugmiik’ (thank you). I’m happy to report that the next morning I did hear some of the qallunaqs (white people) using those terms and even saying ‘ullaakut’. 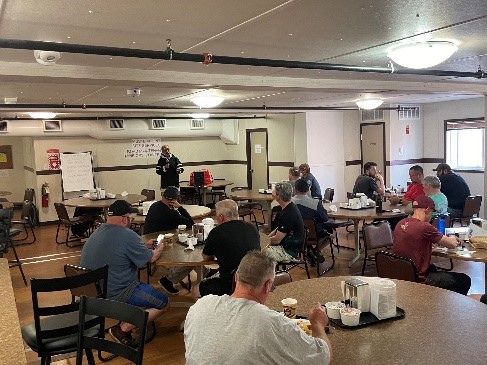 I emphasized that Inuit has always been a welcoming culture, and that working together is the way of life in Nunavut. Many in attendance thanked me later, for giving them more knowledge of how things are in North Baffin.

Later that day, I travelled to 380 Camp at the Port Milne site. I really enjoyed the helicopter ride, which gave me a unique perspective and better sense of the terrain, where the tote road leads to Milne Inlet. For my evening presentation I wore my traditional qulittaq, or Inuit parka. Some employees asked about my interpretation of some of the obligations in the Nunavut Agreement. I talked about the need for Inuit Impact Agreements before any new mine can start in Nunavut, and described the necessary roles of government. 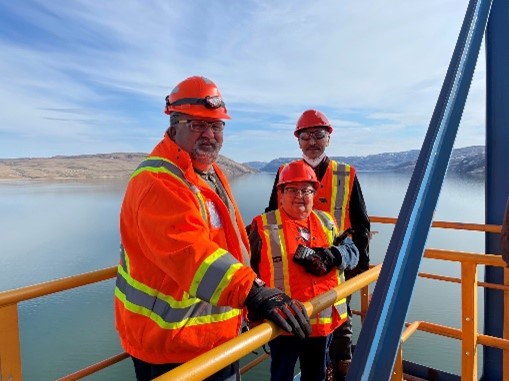 The second part of my visit to Baffinland was an eye-opening tour of the mine operations. In Milne, I donned all the necessary safety equipment and had an opportunity to go right to the top of the massive crane that loads the ore ships.

What an awesome view, and it was magnificent to see how that giant engineering marvel works and what it is involved in its operation.

In the afternoon, we flew back to Mary River, where I gathered with about 18 Inuit staff at the site. We talked about what it’s like to work at Baffinland, and their desire to encourage more Inuit to work there. Overall, it was a very positive and informative gathering. The employees said they appreciate all the great benefits they get, and that knowing they are helping their families and communities gives them more confidence in themselves. I encouraged them to continue with their employment and to learn and train in different fields as much as possible. Baffinland’s vision is to see more Inuit learn, grow and succeed with the company and eventually become managers and supervisors for the next generation coming in. After all, this mine could be operating for decades to come. 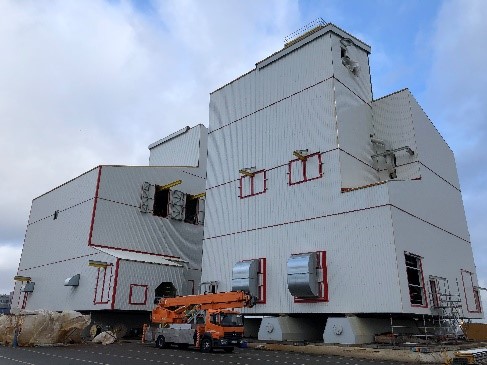 I have to say, the meeting was so positive and productive, I suggested Baffinland hold them more often, to give our Inuit employees an opportunity to talk and mingle, and to become truly proud to be an Inuk who is making a difference to their communities and to Nunavut.

After the meeting, I was given a tour of the rest of the mine, including the actual site where the ore is blasted, crushed and readied for transport to our Port Site. I was impressed with the professional operation, and it opened my eyes to what it takes to get ore ready, and how each section, each group and each person at the mine plays an important role in making the whole operation function.

After two days, I left the site and flew home, knowing that I had done my best to give as much as I received. The names, stories and faces from this Nunavut Day will live in my heart forever.